Istanbul, the city of seven hills, is very popular. In Istanbul, which has hosted many stories from the past, people have shown more interest in certain places and places over time. So much so that these points became the meeting places of friends and lovers. There are so many beautiful and unique alternatives to spend a long and enjoyable time, or to return to the main route after meeting, that you may want to visit all of them one by one. Let’s look at the historical meeting points that have witnessed the old times of Istanbul together. Who knows, maybe you’ll even pick one of them for this weekend and make a plan there!

We can define Atlas Passage as one of the oldest entertainment centers on Istiklal Street. Atlas Cinema, which takes its name from the passage itself, Küçük Sahne heirloom from Muhsin Ertuğrul, and this passage, consisting of 44 large and small shops, is the perfect fit for your cultural activities. Let’s not forget that the cinema in the passage has been restored and now welcomes people with its new appearance. Everyone who comes to Beyoğlu must visit the Atlas Passage, which makes you feel the experiences of past times from the moment you step in.

If you happen to pass by Beyazıt, the Grand Bazaar is a living history that you will never miss. Located at the intersection of Beyazıt, Nuruosmaniye, and Mercan districts, the bazaar is one of the oldest covered bazaars in the world. “Is there a bazaar with legs in all three districts?” don’t say. If we say that the Grand Bazaar has nine main gates, its streets, inns, and approximately 4000 shops, the majesty of the historical building will be better visualized in your eyes. If you happen to pass by this historical building, hosting meetings for centuries, frothy Turkish coffee is for us. Even if you haven’t seen Taksim Square in real life, you must have come across it in any Turkish movie. Located in the heart of Beyoğlu district, the square has been one of Istanbul’s most famous assemblage points for a long time. We can say that it earns this reputation with its connection to Istiklal Street, which local and foreign tourists never return without seeing, and the historic hotels, restaurants, shops, and entertainment venues around it. Galata Tower, one of the first stops of those who say “I want to look at you from above, O Istanbul,” is a fascinating meeting point with its location in the middle of Beyoğlu and Karaköy. This historical construction, named after the Galata district and built as an observation tower in the past, now serves as a museum and exhibition place. Those who want to enjoy the panoramic view of Istanbul can also appraise the observation terrace of the tower. The history of Baylan Patisserie, one of the well-established patisseries of Istanbul, dates back to the first years of the Turkish Republic. The historical patisserie, branches in Karaköy, Bebek, Gayrettepe, and Kadıköy, is a unique meeting point for those familiar with its ingredients. If you have met at Baylan Patisserie, which offers a satisfying experience to its customers with its centuries-old experience and unique flavors of its production, never leave without eating a Kup Griye. It is impossible for those who have been to Kadıköy even once not to see the famous Bull statue. The tiny square of the figure in Altıyol welcomed its visitors at the middle point where the roads intersect and witnessed many gatherings and reunions. The statue, made by Isidore Jules Bonheur in 1864, was moved to its current location in 1987 after being carried for a long time and has since become one of the symbols of Kadıköy. Of course, there are many places to choose from if you meet your spouse, friend, or lover in Beyoğlu. If you say, “Well, how are we going to decide?” first of all, you need to look at your meeting purpose and wishes. Patisserie De Pera is one of the addresses preferred by those who say, “Let the atmosphere fascinate us, and the tastes are wonderful.” This stylish patisserie is located inside the Pera Palas Hotel, which was opened to provide high standard service to the passengers of the world-famous Orient Express. Once you go, you will want to visit Patisserie De Pera’s charming atmosphere and delicious tastes of its production, and you will want to revisit it. 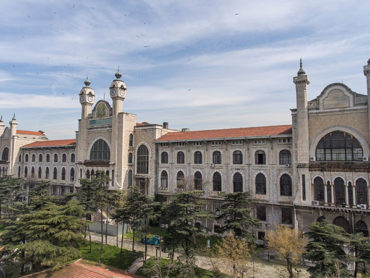