Architect Raimondo Tommaso D’Aronco, born in Italy in 1857, was commissioned by the then Italian Government to support the Ottoman Empire and designed the Ottoman National Exhibition. Raimondo D’Aronco, who lived in Istanbul between 1893 and 1909, played a significant role in repairing public buildings damaged in the 1894 earthquake in Istanbul. Raimondo D’Aronco, the successful architect of the reign of Sultan Abdulhamid II, also creates many important works besides restoration works. We have examined the works brought to the distinguished city of Istanbul by the famous Ottoman palace architect Raimondo D’Aronco, who used his own Art Nouveau style in the works of which he was the architect. Yıldız Şale Mansion, which is one of the structures of Yıldız Palace Complex that has survived until today, takes its name from the word “Chalet,” which means “Mountain House” in French. With the additions made in 1880, 1889, and 1898, it takes its current form. Yıldız Şale Mansion, whose architect was Raimondo D’Aronco, has been serving as a museum since 1985. Huber Mansion, located in Tarabya, is one of the most important symbols of the Ottoman-German relations that increased in the 1880s. The mansion’s first owner is a German arms dealer and the Ottoman State representative of the German arms company Mauser. Huber Mansion, whose builder is unknown, turns into a complex with several structures built around it by the famous architect of the period, Raimondo D’Aronco. Huber Mansion, which was confiscated by Kenan Evren, one of the former presidents, and started to be used as a summer residence for the Presidency, is located in the Tarabya Mansion Campus belonging to the Presidency. Yıldız Çini Fabrika-i Hümâyûn, which Sultan Abdülhamid II founded to develop Turkish tile art, was damaged in the 1984 Istanbul earthquake and was rebuilt by Architect Raimondo D’Aronco in the same year. Nevertheless, Yıldız Tile and Porcelain Factory, a museum factory affiliated to the National Palaces Administration, currently under the Presidency, continues to produce various porcelain items and develop projects related to them. This fountain, commissioned by Architect Raimondo D’Aronco between 1896 and 1901 by Abdulhamid II, was previously located in front of the Tophane Nusretiye Mosque. Afterward, it was dismantled as part of the road widening works in 1957 and moved to Maçka Park. This work, one of the original examples of Ottoman fountain architecture, is also important from an architectural point of view as it is a square fountain with four faces. Mekteb-i Tıbbiye-i Şahane, which was built by Alexandre Vallaury and Raimondo D’Aronco on the orders of Sultan Abdulhamid II, was used as a military medical school between 1903 and 1909 and served as a civilian medical school after 1909. This work, which started to serve as Haydarpaşa High School in 1933 with Mustafa Kemal Atatürk, was allocated to Marmara University in 1983 and later became a medical faculty. It has been serving as the University of Health Sciences since 2015. When a lodge built during the reign of Mehmet the Conqueror was destroyed, a mosque was built by Merzifonlu Kara Mustafa Pasha. As this mosque became unusable, another mosque was built on the same place by D’Aronco in 1903 by order of Abdulhamid II. Reflecting the Art Nouveau style, this mosque was demolished in 1958 during the expansion works of the square. 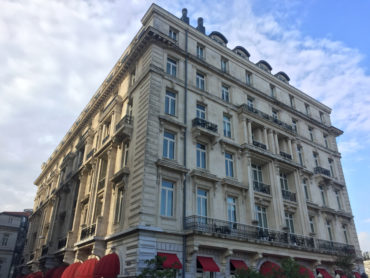